﻿﻿A primary goal of decorated-apparel shops should be to fulfill as many of their customer’s needs as possible, in house. However, each decorating process has its strengths and weaknesses, which often limit a decorator’s ability to meet every need.

Some processes require a certain minimum to be cost effective, turnaround times are several days to a week, the print gets more costly as colors are added, and the artwork has to be converted into another format such as digitizing or screen making, which can be cost prohibitive for small orders. What types of apparel or accessories customers want decorated also has been a limiting factor for shops in the past. Waterproof nylon, leather, Lycra Spandex, and performance apparel present special challenges, especially for screen printers.

But now a new technology has emerged that makes it possible for any size or type of decorator to offer full-color graphics—with no minimums and fast turnaround—that will adhere to almost anything. The name of the game with CAD printing is versatility—from high-tech jerseys such as this, to average run-of-the-mill T-shirts, to signage of all kinds and even bumper stickers.

On the horns of a dilemma

This new technology, commonly referred to as “print and cut”—what we call CAD printing—employs a unique type of machine that, with an inkjet printer, prints full-color graphics, then contour cuts the design so it’s ready for application. There are two types of materials commonly used: either heat-seal, used for garments and fabric applications; or pressure-sensitive, used for items such as bumper stickers and window decals.

In the past two years, a wide range of materials have been specially designed to be sed with printer/cutters for apparel, which has opened the doors to all kinds of new applications. Now decorators are finding that many of the past limitations with which they’ve had to struggle are gone.

Steven Jackson made just this discovery as he was stuck on the horns of a dilemma concerning his home-based embroidery shop in Clifton Park, N.Y., at the time called Just Us Embroidery. Jackson, who operates his shop along with his wife Jen, was getting more and more requests for full-color logos on apparel. He hated to turn those orders away, but was reluctant to contract this work out because he didn’t want to lose control over the quality and delivery.

“And that’s where we made our first big mistake,” says Jackson. “We jumped headfirst into getting a whole screen-printing set-up, including a six-station press with all the materials. It was great equipment and wonderful support, but it was more than we were ready for. We learned that it wasn’t the right way for us to go, and we ended up selling that equipment.” Jackson then proceeded to embark on a trial-and-error journey to find the perfect process that would help him achieve his business goals. CAD printing relies on a new breed of equipment that not only prints the design—in full glorious color—but then automatically contour cuts around it for easy application.


The concept of our business is, if a customer walks through the door—whether they are an organization, business, sports team, civic group or whatever—we can take care of their needs from beginning to end. We can provide shirts, hats, embroidery, screen printing, signs, bats, mitts, banners—you name it, we want do it. We now have an ASI membership so we can get promotional products too.”

In pursuit of his quest, Jackson experimented with a variety of decorating options. He started sending screen printing jobs to contract custom-transfer companies. While he was happy with the quality and low minimums, he still wasn’t able to offer same-day turnaround. “We dabbled in sublimation,” he notes, “but it has its pluses and minuses such as needing to be on light-colored polyester substrates, which limits what you can do.”

Next, after talking to numerous people on the T-Shirt Forum (t-shirtforums.com), he purchased a garment-graphics cutter. Jackson was happy with the cutter because it allowed him to meet many more of his customer’s needs, but not yet all. He still needed a fast and easy way to produce full-color graphics in house. He started looking into digital-direct inkjet-to-garment printers. 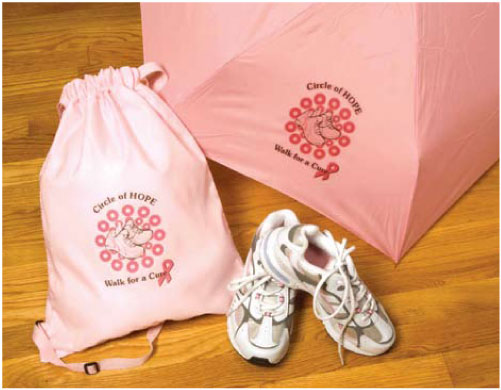 
“We were teeter-tottering with getting a direct-to-garment printer, but there seemed to be too many drawbacks,” he recalls. “If I wasn’t doing one-off T-shirts or a lot of small orders of multicolored shirts, it was going to be an expensive dust collector. “Then I was at a trade show with my wife and we went around to all the different booths and finally saw the printer/cutter. We started thinking beyond T-shirts. It was an obvious choice for us to go with the printer/cutter versus the direct-to-garment printer. With the printer/cutter I could not only do T-shirts, but also bumper stickers, window decals, banners, magnets and signs. Since then, if my printer/cutter goes one day without being used I’m amazed.”

Jackson—who has since renamed his company Seaglass Logowear to reflect the company’s expanded offerings—has found other advantages as well: “The thing that people seem to really like best is seeing it made right here,” he says. “They can come in and the printer/cutter will be running, making stickers or magnets, or we’ll be heat pressing T-shirts. They know they have the control to tweak it right here.”

Since purchasing the printer/cutter in March 2007, Jackson has seen a significant impact. “Our business has grown incrementally,” he says. “Just this past August, we moved out of our house and got a retail space, which has been quite the undertaking. About ninety percent of what we sell to our customers now is made right in our shop. The only thing that we don’t do here is pad printing, which is why we got the ASI distributorship.”

Jackson says a key element with his printer/cutter is that, when somebody needs a quick turnaround, it lets him take care of it. He can have somebody walk in with graphics and have their product in a day or two. With custom transfers he’d expect to pay extra to get that kind of turnaround. “We also can run single banners, which is a great moneymaker.”

Jackson isn’t the only decorator who has found the CAD printing solution to be ideal for his shop. Eric Meyer and Debra Cates, co-owners of JPD Tees & More in L.A., purchased their printer/cutter after being dissatisfied with how their direct-to-garment printer worked on darks.


The pair decided to go with a direct-to-garment digital printer because it could easily print a 12-color logo for an RV Club that Meyer owns. “We had originally planned to have the logo screen printed but with the screen set-up fees and minimums, we decided it was too much,” he says.

Cates ads that they were getting requests to do designs on dark shirts and, although their direct-to-garment printer had the capacity to do darks, it took so long to do a single print they decided not to go that route. “We were talking most of our customers into using light garments,” she recalls, “while we racked our brains looking for a solution.”

Like Jackson, their initial solution was to purchase a garment-graphics cutter which allowed the company to do one- and two-color vinyl on just about anything that could fit into a heat press. It also allowed them to print on apparel other than 100 percent cotton, another limitation of the direct-to-garment printer. But the need still wasn’t being met to do full-color prints on darks.

Then the pair found out about the printer/cutter through a sign printer they were using to contract out decals and stickers. At the time, they didn’t realize that the printer/cutter could be used to decorate apparel, but they soon learned that the opportunities were almost limitless. They purchased a printer/cutter in September of last year and, since then, there has been no looking back.

“Compared to the learning curve of our inkjet-to-garment machine, the printer/cutter was a cake walk,” says Cates. “The benefit of having a product that is used by so many people is huge. There is so much information on the Internet from real users. Also, our suppliers were only a phone call away and helped us through the few small bumps we had in the beginning.”

Now the company is not only printing dark-colored apparel, but gaining new business producing decals, stickers, banners, bumper stickers, and even fine-art prints on canvas. Artists, wedding photographers and others can bring their files to JPD Tees and the company can print the artwork on a special canvas media designed for the printer/cutter, which is then stretched on a frame for mounting.

“Our only regret about the printer/cutter is that we purchased the thirty-inch and not the fifty-four-inch,” laments Meyer, “because we still have to contract out for the four-by-eight-foot signs that are really popular.”

Cates adds that the greatest benefit to buying the printer/cutter has been the ability to keep printing in-house with no minimums, lead times or quality-control issues. “It has been a huge benefit to offer so much with one machine,” says Cates.

Clear evidence that, with new print-and-cut technology, you may never have to turn away a customer again.

Roland DGA supplies inkjet printers, printer/cutters, flatbed printers, and 3D production solutions. As well as offering the most advanced and reliable equipment in the industry, Roland DGA provides a rich network of information, support and article content for its dealers and customers.