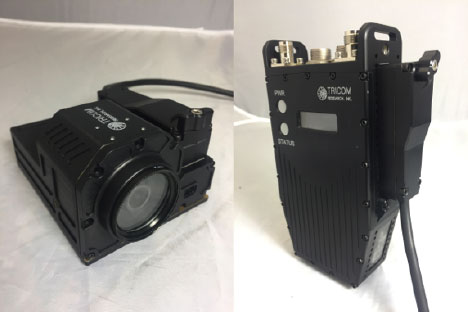 Rich Taras is Mechanical Design Engineer at Tricom and John Boos is VP of Operations. As a company, they take client ideas and build everything from the ground up— sketching, engineering and making these concepts function as real, practical technologies. We asked them about their latest prototype technology.

“It’s an IP Radio Cam— a dual band radio for use on encrypted networks that transmits video images in a three-to-five mile area to a remote base station in a pelican briefcase. There is a side port on it in which you can connect cameras, trip sensors and look for movement.“

They continued to explain how this advanced technology works, and the total control that it can give security and law enforcement agents.

“Captured data can be wirelessly transferred to the base station that records in low and high definition streams from up to twelve cameras at a time. The user can pull-up recordings based on timestamps and movement. It’s a surveillance-encompassed package in which you can see everything in multiple rooms and locations.”

Tricom is a very specialized business that has few competitors and builds close relationships with its clients. They understand what’s currently available in IP radio technology and replicate the user-familiar “form, function and feel” of current systems, but substantially change the technology and capabilities of their product.

“We know what the military needs in the field. Other systems don’t do what ours does. From a communication amplifier standpoint, we are not producing a standard “off-the-shelf” product. We take user radio signals and amplify them for Line of Sight and Satellite communications. The understanding of communication waveforms and wireless amplification is the core of our business.” 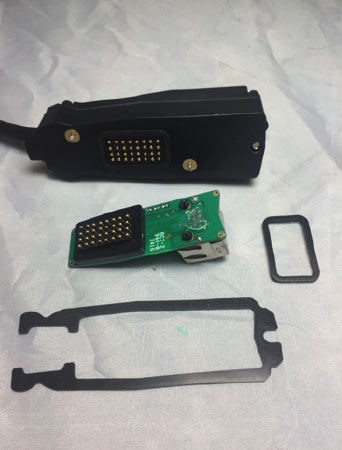 Tricom custom designs and fits everything. They do almost everything in-house and require technology that can create parts with ultra-precise tolerances as part of the concept-to-prototype process.  This is where their Roland MDX milling machine plays its part in their workflow.

“The first thing we milled in-house were custom 32-bit connectors that we needed for testing. A production machine with a fine mechanical resolution is essential for this kind of prototyping because each one of the 32-pins is a tight fit and the mating holes needed 0.001 of an inch accuracy to enable the male pin part to press-fit with the female part.”

Rich and John explained that it’s essential that Tricom have their own CNC machine for practicality and cost reasons. Prototyping is never a process in which just one part is made and it often takes the trial and error production of many versions before the part is perfected.

“There’s nothing available like the 32-pin connector we created.  And if we didn’t have the capability to create it ourselves, we’d have to draw it, send it out and get it made at cost and with a couple of week’s lead-time.”

When making the 32-pin connectors, they described how they typically make around six-versions for testing before they get it right. If they did not have the capabilities to make these parts themselves, it would cost them $1,600 to outsource multiple versions and they would had to wait a frustratingly long time for each one.

“It’s a complicated process – especially when you’re trying to mate two pieces that are prone to stacking errors and need to be watertight and pass submersion testing. It took us five-or-six attempts to get this right. This would’ve been costly but more important is the time. We get these contracts and we are given months to create a product. We can’t wait two-weeks for the next connector to test.” 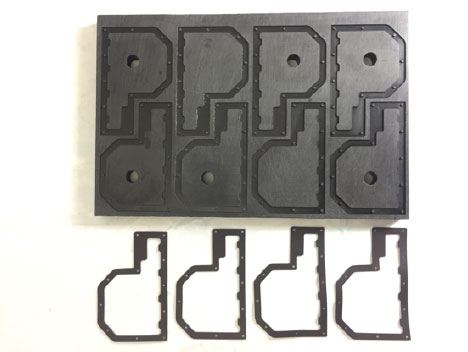 Gaskets produced for fitting and testing.

For Tricom Research, CNC milling technology is the only method in which they can achieve the tolerances they need to produce their connectors, gaskets and other parts. Even high-resolution 3D printers can’t get close to the detail that they need.

“You can’t make that part with a 3D printer and you can’t print Delrin – the engineering plastic that we use frequently. You also can’t test the thickness of gaskets because you can’t achieve the specific depth tolerances to test compression”

Tricom can produce a gasket or connector prototype within a day. They also revealed that the parts made with their CNC machine are more than just proof of concepts, they are used as actual working versions.

“With the CNC technology, it gets us through the prototyping stage. It proves out designs and allows us to order production of larger quantities. When we make prototypes, it’s not just close to the real thing, it’s the real pre-production part that can also be tested by the client for heat, submersion and other trials.” 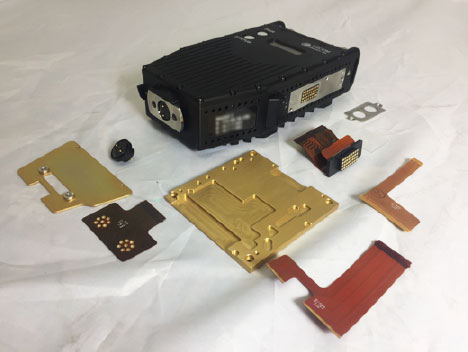 Tricom technology with the various internal parts that required prototyping for form and fit.

When creating prototypes, the form and fit process for Tricom is critical. With CNC milling technology they are able to very quickly and precisely mimic boards and flexible circuitry to make-ready for actual production of these very expensive parts. Rich and John described to us how the MDX has enabled them to do this.

“Outsourcing the production of circuit boards and FPC cables has a two-to-three week lead time. It’s expensive and we can’t afford to keep reordering them. We use similar flexible material with comparable flexural properties to nail-down these exact forms. As you can imagine, the alignment and assembly has to be perfect when you have to lock-into a 68-pin header. Mistakes are part of the process, but it only takes ten-minutes to cut one of these and saves us thousands of dollars.”

Rich and John told us that having technology in-house makes the company more creative because they’re not wasting money on outsourcing the production of a far-out idea that they don’t know will work. As they explained, having an MDX is not only valuable as a cost and time-saving tool, it allows them to realize solutions very quickly.

“We get called first because of turnaround times. Time is more valuable than anything at this company. I can’t wait on anything getting out-the-door because everything hinges on something else. With the MDX, you have the ability to imagine a solution and make it within a day. It also allows us to pursue ideas that we may not have pursued if we didn't have an easy route to go about it.” 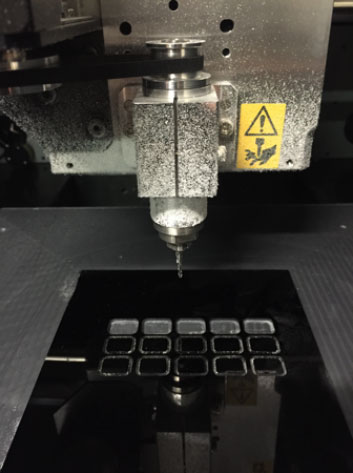 When discussing the major technical benefits of the machine itself, Rich and John explained to us how the MDX creates the ideal solution for their particular work environment and needs.

“It’s quick, quiet, easy-to-use and it doesn’t use much power. Plus, we can run it unattended because it’s so safe and contained. That’s a big deal for us. Our insurance rates depend on our company creating a secure work environment.”

In closing, Rich and John described how MDX technology has helped Tricom become more efficient with their production model.

Roland DGA supplies inkjet printers, printer/cutters, flatbed printers, and 3D production solutions. As well as offering the most advanced and reliable equipment in the industry, Roland DGA provides a rich network of information, support and article content for its dealers and customers.