Outlook from the pundits

I just wrapped up ISA’s Supplier & Distributor Conference, where Dr. Dietrich from ITR Economics presented an outlook based on key economic indicators like Producer Pricing Index, GDP, unemployment, housing starts and a host of other factors to try to better forecast the business environment looking forward.

Dr. Dietrich’s outlook was positive in the near term – and wasn’t based on recent market swings or the upcoming November presidential election. What’s more, his outlook doesn’t change based on who wins! (He’s predicting Obama will win, by the way.) Pretty bold statements, but since ITR has a very good track record (north of 90% forecast accuracy), I’m prone to agree with him. I’ve also heard Alan Beulieu from ITR speak a few times at other events, and his outlook is consistent with that – positive growth in 2012-13, with a mild recession in 2014-15.

So that’s the big picture outlook – based on hundreds of key indicators in the general economy.

What does it mean for those of us in the sign & graphics business?

David Williamson wrote in his “How’s Business” article from March 2012 Sign & Digital Graphics Magazine, “The January survey asked sign companies to look back to the last six months of 2011, and compare their sales results for that period with their expectations for sales for the first six months of 2012. Available replies were: much better, better, about the same, worse, and much worse.” 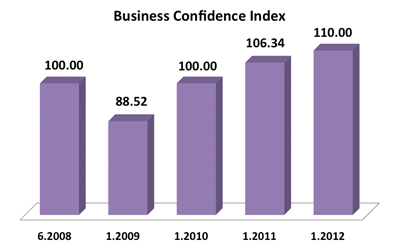 And continued, “Of respondents, 59.8 percent saw business improving (much better or better), 31.7 percent saw a stable business outlook (about the same), and just 8.5 percent saw worsening (worse or much worse) business six months ahead.”

Tim Greene from Infotrends wrote in his Market Intelligence column, “InfoTrends executed a survey with FESPA wherein we asked print service providers what their expectation was for their wide-format printing business in 2012. Figure 1 illustrates the mix of results, but the average among all respondents was that they expect their business to grow by almost 15 percent in 2012.” 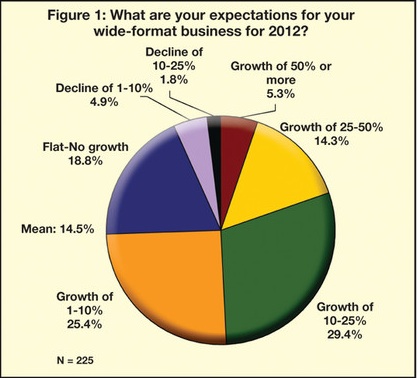 So, with 5 months on the books, it’ll be interesting to see a follow-up survey to see how sign shops did in the first half of 2012, or to see if Tim’s prediction of an average of 15% growth holds. But my prediction is it would show that business is growing and growing fairly well. In just anecdotal conversations I’ve had with other manufacturers, media suppliers, and customers, business has been trending up. And that’s good for all of us. To borrow from Dr. Dietrich’s presentation title, it’s time to “Make your move.”

We’re making ours at Roland.

< Show Off! See the latest from Roland Customers!
Email Frequency – When Is Enough Too Much? >