February 19th marked the beginning of the year of the goat in the Chinese calendar. To join in the New Year celebrations, we’re presenting 10 super-interesting facts about goats. Use these facts to impress your friends and to avoid looking sheepish during the New Year festivities!

1. Goats were extremely important to the development of modern man. They were the first animals that we domesticated– experts suggest around 7,000 -10,000 BCE.

2. A goat’s eyes are rectangular rather than round like other animals, giving them the ability to see really well at night and giving them awesome peripheral vision. This makes sneaking up on a goat extra difficult for lions, tigers, and people. 3. Every morning when you drink your coffee, you should toast a goat! This is because it’s very possible that a herd of goats discovered coffee. So the story goes, an Ethiopian goat herder saw goats behaving with a new vigor and energy after eating beans from a certain bush. After trying them himself, he felt more awake and ready-for-the-day.

4. Goats are known for passing illnesses onto humans. These include Leptospirosis, Cryptosporidia, and echthyma (a pox type virus). But before you start locking your doors to avoid the goat apocalypse, most of these illnesses occur through skin abrasions and are extremely rare. 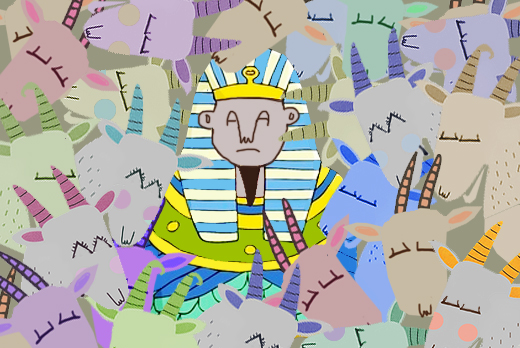 5. The ancient Egyptian Pharaoh Cephranes may well have been the biggest fan of goats in all of history. He was buried in 2498 BC with more than 2,000 of them.

6. If you thought chicken or beef were the most popular meats in the world, you’d be wrong! It is estimated that more people eat goat and drink goat milk than any other animal. Somewhere around 72% of the world’s milk consumption is from goat, although this number is difficult to accurately measure due to its popularity as a food source in the developing world. It should also be noted that goat milk is healthier and less allergenic than cow milk.

7. Goats are gregarious creatures that need the company of others. The absolute definition of a “herd animal” they will live very short and unhappy lives without the company of at least one other goat, horse, cow, or other animal. But unlike their close relatives, sheep, they have distinct personalities and don’t “flock” like sheep. 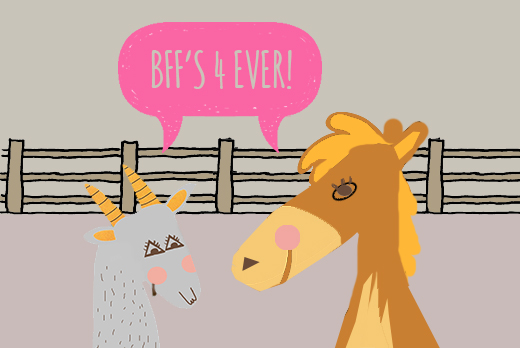 8. It’s popular for racehorse owners to keep goats as companions for their thoroughbreds because goats have a calming effect on horses. The practice of stealing a horses companion goat so it would do poorly in a race is thought to be the origin of the term; “That really gets my goat” which is used to describe something that agitates and makes one mad.

9. Goats do not eat tin cans, tires or other garbage. They are in fact quite picky eaters that feed mostly on plants and weed-like grasses (they don’t actually like turf grasses very much). However, it is true that they find odd things tasty, like the glue on the labels of cans and not the actual cans as the legend suggests.

10. Goats are one of the most adaptive and successful animals on the planet. They exist on every continent except Antarctica and can survive extreme colds and the most unforgiving mountainous terrain that most animals could not withstand. The mountain goat is one of THE most incredible animals in the world and can climb near vertical walls with barely any footholds.

Goats are truly amazing creatures that deserve their place in the Shēngxiào (Chinese zodiac). Anyone born this year or under the 4th Trine of the Chinese calendar are known for their calm nature, intellectualism, compassion, manners, and artistic talent. Let’s all raise our glasses to the goat and to a prosperous new year.

• We wish “Gong Xi Fa Cai” to all our customers and look forward to a great year of printing, cutting, engraving, milling and profitable new opportunities.

Ben Fellowes is Roland DGA’s Sr. Copywriter. A self confessed design and printing nerd, he is a wealth of knowledge on art, design, software, trending topics and random trivia. He loves heavy rock, great beer, and beautiful craftmanship.

< What Print Color is This Dress?
Simplify Apparel Decoration with these Helpful Application Tips >